“Being at the very front of entrepreneurship”

Entrepreneurship and Societal Impact of Research - ESIR is one of the two main activities for ECIU. The Steering Committee, presently lead by University of Stavanger, is meeting several times a year to discuss activities in the different working groups. ESIR is addressing areas as: 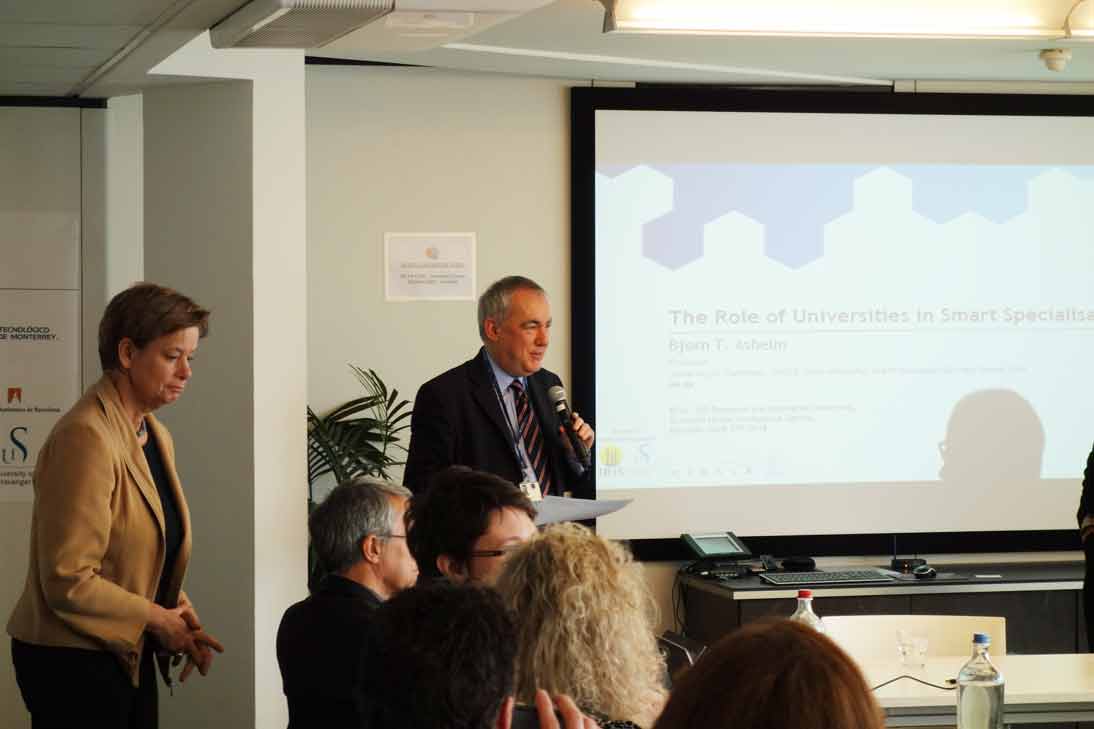 Activities of the Steering Committee

Our Institutional Experts in the Steering Committee

Examples how we challenge conventional thinking

strategies for the promotion and development of entrepreneurship and social innovation
through differentiated actions and qualifying and business incubation spaces.

AAU Innovation facilitates knowledge collaboration at all levels. The colleagues at AAU work intensively to develop new concepts for knowledge dissemination and bridge building to businesses, organizations and educational institutions, and make experience and expertise available to others.

The three point project Triangulum is one of the three European Smart Cities and Communities Lighthouse Projects, set to demonstrate, disseminate and replicate solutions and frameworks for Europe’s future smart cites. Stavanger as one of the Triangulum flagships cities serves as a testbed   innovative projects, focusing on sustainable mobility, energy, ICT and business opportunities.

Kennispark Twente is the largest innovation campus in the Netherlands, see Twente Facts & Figures.
Some recent eye catchers of Twente start-ups can be seen on the right.

Technological Platforms: The purpose of this initiative is to strengthen the bond between the University of Aveiro and businesses by promoting R&D projects and stimulating  complementary activities aiming at promoting economic benefit both for UA and companies. Currently, there are 7 technological platforms in several economic fields.

Technology-Based Entrepreneurship Course (CEBT): This joint initiative of the University of Aveiro, and two other universities located in the centro region of Portugal (Beira Interior and Coimbra), together with the Centro Region Business Council/Center Region Chamber of Commerce and Industry (CEC/CCIC). These entities joined efforts in 2006 with the objective of stimulating the capacities and skills needed to create technology based companies. Since its creation, this course accounts with 10 editions, including two Iberian editions (in 2012 and 2014), in association with the Universidad Pontifica de Salamanca, the Fundación General de la Universidad de León y de la Empresa, the Fundación General de la Universidad de Valladolid and the Fundación General de la Universidad de Salamanca. By means of an innovative methodology, based on workshops, mentoring and coaching sessions, boasting a team of professors and mentors with vast know-how and experience in entrepreneurship and innovation, CEBT has invested in a practical component as a factor for differentiation, in order to promote the development of new spin-offs. CEBT is aimed for higher education students, recent graduates, postgraduate students, senior staff and management in companies.

TEC de Monterrey started a couple of years ago a special entrepreneurship programme for families, so it has diversified its experience in order to directly impact society.

Business Incubator of the region of Aveiro (IERA):

Business Incubator of the region of Aveiro (IERA): This incubator with branches in all Municipalities of the region of Aveiro and it was promoted by the different Municipalities, the CIRA (Comunidade Intermunicipal da Região de Aveiro), the Industrial Association of Aveiro District (AIDA) and the University of Aveiro. It aims to economically empower the territorial strategies for the promotion and development of entrepreneurship and social innovation through differentiated actions and qualifying and business incubation spaces.

TEC de Monterrey belongs to the Global Entrepreneurship Monitoring Survey that,  since 1999, has been collecting, analysing and interpreting data across the world on the capacity of individuals to act entrepreneurially (i.e., pro-actively, innovatively and responsibly). The survey, which started as an initiative of two researchers(Michael Hay, London Business School, and Bill Bygrave, Babson College) in 1997, by asking a simple question (”Why are some countries more entrepreneurial than others?”), evolved into a globalsurvey conducted annually, which addresses all the regions in the world (Africa, Latin America & Caribbean, Asia & Oceania, Europe, North America). The 2014 GEM survey covered 73 economies, representing 72.4% of the world’s population and 90% of the world’s GDP and it was designed, edited and published by the TEC.

Twente is specialized in a broad financing network to support start-up companies in various growth fases. see Loan, Subsidy, Equity and other arrangements available in the Twente Kennispark Ecosystem.

TEC de Monterrey created an entrepreneurship event called INCmty, which is an unparalleled entrepreneurship festival in Latin America where entrepreneurs, innovators, investors and organisms from the entrepreneurial scene gather, learn, network and launch initiatives. In the first event forty start-ups were launched, in the second sixty were created and the expectation is that 100 start-up will be created in the 2015 edition which will be held on November 20-22 in Monterrey.

We also challenge conventional thinking in

Entrepreneurship and Societal Impact of Research